We are currently seeking to recruit a Dean of Studies. Please download a Job Description (below) and Application Form (underneath).

We are currently seeking to recruit a Dean of Studies. Please download a Job Description (above) and Application Form (below).

We produce a regular newsletter which has all the latest developments from The Light College and Collective, and gives a good sense of what’s been going on for us.

If you’d like to stay in touch with our latest news as it happens, and to interact with us online, you can do so on Facebook, Instagram and Twitter – we’d love to be able to connect with you in this way.

The Light College is a small but growing college for pioneers and evangelists. We run accredited university courses in theology, mission, evangelism and pioneer chaplaincies up to and including BA. The new Dean is a pivotal role and needs to be someone who shares our vision. They will be the person who organises, both practically and financially, how we operate and will effectively organise the day-to-day running of the College. To find out more and download an application form, please visit lightcollege.ac.uk/news-from-the-light-college-and-collective/ ... See MoreSee Less

Praying for God's man/woman of choice to be appointed

MONDAY PRAYER. BE. O God, in this moment, I allow you to look at me and to love me. I let myself simply be in your presence. I don’t need to think or feel anything. Thank you for loving me. ... See MoreSee Less

Lydia shares about her journey to being a student with us… Having heard from Chris 4 years ago about the Light Project, it was but a mere dream for me, thinking I wasn't clever enough or able to pay. Then… last summer I was asked to an event where I was booked to do kiddies and adult glittering (I’m a ‘glitter fairy’). I was doing this event free of charge and had felt God really telling me to lead a particular man (who would be at the event) to Jesus weeks earlier. I explained to God that I would lead him, but not now (‘I’m here to glitter’). The next thing I know this same 6-foot-tall man rushed across the field, jumped in my chair and said that I’d better glitter him... I said ‘Take a seat, I think you’re going to get a bit more than that’. I’d led his wife to Jesus a month prior, and started with that. I chatted away and just popped into the conversation, ‘So have you ever given your life to the Lord.’ He repled, ‘No, I’ve always been an atheist’. I said, ‘So, shall we just crack on with it now then?’ He said, ‘Yeah, go on then’. So we prayed a prayer of commitment, and we both cried, as did his wife. As said, he did leave with a bit more than glitter!!! His life has been totally changed, with him now running toward Jesus and not away. He’s currently doing Alpha course and considering baptism with a local church. God is good and faithful!

Chris Duffett had been sat next to me drawing, but also listening. He said, ‘Did I just hear correctly?’ I said, ‘Yep, you sure did.’ He suggested the course and I told him all my reasons ‘why not’. Chris advised me to pray, apply, and if God wanted me on the course I would be. And ta-dah, I’m here. God is good - where there is no way he will make a way.

I then started a new job and in that week 4 people either messaged or spoke to me telling me I should be on the course ...total confirmation! So I’m here to learn how to take my roots deeper, so when wobbles come I won’t shake!!!! ... See MoreSee Less

Such a wonderful story, you are obviously where God wants you to be . Prayers and blessings on your journey Amen 🙏

Light College student, Andy Monks, shares his story of outreach on the Sunday morning of our first residential... 'Firstly, I visited a local market. I noticed some connection to my story in many stalls, so I went to them, shared my story and all of them shared some of their story in return. I was blessed that 3 of them allowed me to pray for them. Then I sat in the park with the ‘can I tell you my story' sign. One guy approached and he ended up staying with me for an hour as I listened to his story. He allowed me to pray for him and said it meant a lot that someone spent time listening to him.' ... See MoreSee Less

The Light College and Collective updated their website address.

The Light College is an official partner of The University of Chester and offers courses which allow people from a variety of backgrounds and ages to continue, or return to study by way of our Degree courses, Baptist ministerial training and a Professional Certificate in Pioneer Chaplaincy.

By becoming a member of The Light Collective, you would be joining a co-operative community of missioners, pioneers and evangelists who seek to enable and encourage one-another, sharing stories, ideas and resources, and gathering from time-to-time for worship, fellowship and teaching.

You may wish to support us through prayer and/or financial giving, perhaps by also becoming a ‘Friend’ of The Light College and Collective. Without such support and friendship we simply would not be able to do what we do. 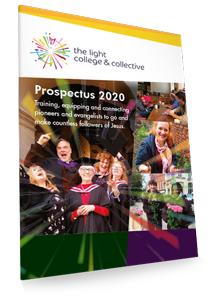